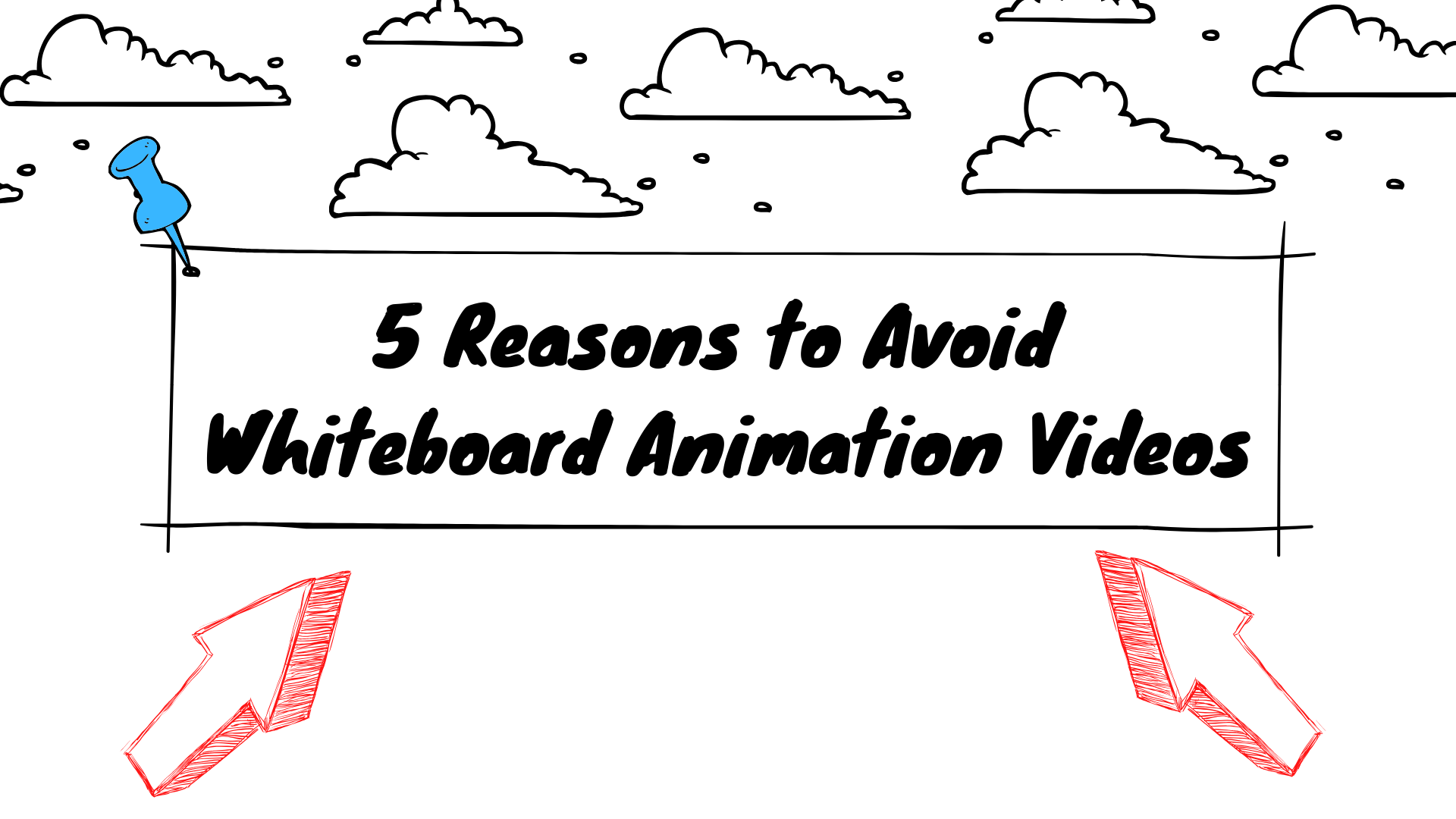 Whiteboard animation videos are a popular choice for businesses and organizations for explaining concepts, campaigns and initiatives. In theory, they’re great. They feel uncomplicated and easy—both on the production side and for viewers to watch and understand. But they aren’t always the right choice.

For those who aren’t familiar with this type of animation, in whiteboard videos you’ll see an artist drawing, in real-time, visually illustrating a message. The message could be an advertisement for a product, a call to action by an organization or a source of general information.

Whiteboard animations have been used at every level of business, from local non-profits right up to the largest companies in the world, including Coke-a-Cola and Toyota.

So if the likes of Coke and Toyota are using whiteboard animated videos, they must be great, right? Not so fast. There’s a time and place for this type of animation, but by and large, they should be avoided. Here are five reasons to avoid whiteboard animations.

Yes, whiteboard animation videos are simple and look clean. But those two “assets” can work against you as well. Overall, whiteboard videos are pretty basic and, as a result, can look cheap.

If you’re investing in an explainer video, the last thing you want is for the final product to give off a bargain-basement, low-quality feel. Because you’re not just trying to communicate what may be a complicated concept, you’re also showcasing your ideas, products or services. And cheap whiteboard animation videos simply don’t convey a sense of quality.

Reason #2: You won’t stand out in crowded markets.

We’re bombarded with quite a bit of content every day, and whiteboard animations have a very distinct appearance. That’s part of their appeal, right? But compare whiteboard videos from several companies in the same industry, and you probably won’t be able to tell which brand is which.

That’s because another unfortunate downside of their lack-luster appearance is the absence of customization. Which completely undermines the primary purpose of these videos! Companies create whiteboard animations to explain or sell something in a memorable way. But if everyone uses the same look and feel, no one stands out, and no one gets remembered.

What’s more, not being able to make distinct choices—whether in your brand style or artwork—results in over-simplification. And that’s exactly what you don’t want when you’re exploring a complicated concept with your target audience. The distinct appearance of whiteboard videos demands simplicity, but the outcome is really a generic animation that looks just like everyone else.

Some whiteboard production companies cut corners in their explainer videos by using drag-and-drop whiteboard animation software. Using a company that tells you the turnaround time will be quick and the price will be low is almost always a mistake. The end product rarely comes out looking like a real human illustrated the animation.

And the illustrations are only the beginning. There’s also the writing and voice over to consider. Creating a script and finding the right person to read it, in addition to pairing the right visuals, is a challenge. As a result, few whiteboard videos meet the mark. In the end, the messy animations and low-quality audio of a cheaply made whiteboard video reflects poorly on the brand associated with the video, not on the faceless creators.

When we started talking about whiteboard animation, you probably immediately pictured the whiteboard videos you’ve seen in the past. Maybe you even thought of an old commercial or a promotional video for your own company. The point is, you’ve encountered this type of animation a million times.

You aren’t alone. The internet loves video, and this popular style has been done over and over and over again—especially in the last few years. This serial overuse has taken the wow-factor out of the equation. So if you really want to stand out from the crowd, avoid whiteboard animations, and go for something high quality and distinct.

Reason #5: There’s a temptation to DIY.

When you’re working with any type of video, depending on what you’re presenting, the production time can be long. A professional approach to video production includes a to-do list of coming up with the idea, writing the script, creating the video, editing and more. So there will always be time and effort involved.

In the case of whiteboard videos, the widespread availability of whiteboard animation software solutions presents a huge temptation to just do it yourself much more quickly. But are you sure less time and cost will be the outcome?

Try to create your own whiteboard videos, and you’ll end up realizing you didn’t save any time, your probably didn’t save any money, and you definitely don’t have the high-quality animated video you pictured in your head.

Copyright 2022 Explainly LLC. - All Rights Reserved
Back To Top